Our ITM promotors of the PEOPLE project, Bouke de Jong and Epco Hasker, visited the Comoros islands for follow up of the project, which is now going into its fourth year, together with their colleague Dr. Nimer Ortuno Gutierrez from the Damien Foundation. They discussed preparation of potential follow-up projects, further building on the impactful research done so far on enhanced prophylaxis for leprosy in the Comoros and enhancing sustained follow-up of the intervention.

After arriving in Moroni on October12th, Bouke, Epco, and Nimer travelled on to Anjouan and met with Dr Aboubacar, head of the National Tuberculosis and Leprosy Programme, and Dr Younoussa, Damian Foundation representative and Comoros promotor of the PEOPLE project, to review results and discuss progress and plans.

The volume of patients to be followed up has necessitated the implementation of additional follow-up beyond MDT but also the prevention and management of reactions. Efforts are needed to further improve the completion rate of MB cases.

The central monitoring team has a feedback management log. They identified a need to increase the number of drugs (prednisolone and thalidomide) and improvements can be made to the follow-up, with the addition of a leprosy register number to identify the cohort of the person with reactions and the outcome of the episode. Also, an electronic file with the number of people on treatment can help with follow-up and care planning. ODK and GPX Viewer apps are used for the PEOPLE study and also for contact tracing outside the study. An Excel and Access database is maintained for diagnosed and treated leprosy cases.

No drug-resistant TB cases were reported in 2021. Monitoring of resistance to rifampicin  of both M. leprae and M. tuberculosis is important to confirm that single dose rifampicin does not select for resistance.

The Moroni study on TB detection by lingual swab sampling showed a sensitivity of 93% and specificity of 96%, with a concordance of 89%.

A field trip to Moi Moi II followed, the feedback register was reviewed and a meeting was organized with the physiotherapist Ibrahim. The Indian-trained physiotherapist stopped his work due to the problem of unavailability for on-call duty at Hombo Hospital. The physiotherapist will now resume his work and review the priorities for the follow-up of people with disabilities and support in the field for new patients detected with disabilities. This following the construction of the surgical room that will increase the volume of patients to be followed and will be complementary to the sale of physiotherapists.

During the field visit the team found that the link with the community and the screening teams is well established and allows the massive participation of people in the study. Also, it has allowed the training of health care staff in leprosy management, which will strengthen the human resources with its renewal through the supervision of experienced staff. This good follow-up and high quality work has made it possible to plan for possible future studies.

New potential study activities were discussed, taking into account the need to maintain the quality of care for the patients screened, but also to ensure that the people participating in the study benefit from preventive treatment.

A new phase will be programmed with the support of ITM to further investigate the best approach.

On the 18th the team returned to Moroni for the TAP review and visited the outpatient department of El Marouf Hospital as well as the consultation and hospitalization rooms of the Samba Hospital.

It was noticed that solar panels have been installed in Hombo and Samba hospitals. The team in Comoros is happy because the power failures were daily and sometimes lasted half a day. Maintenance is recommended to guarantee its durability.

The PNLT wishes to use an automated reading software for the X-ray. Digital X-rays are used routinely in referral centres in the three islands, but also for screening populations without access during screening campaigns. Contact screening is improved with X-ray and GeneXpert as screening tests.

The average success rate for bacteriologically confirmed TB cases is 93% in the period 2010 -2019.

The use of the radio and GeneXpert will be continued to evaluate its contribution to TB diagnosis among contacts. Also good follow-up will be maintained of TB cases under treatment as well as bacteriologically confirmed TB cases, to ensure the prevention and control of infection of cases hospitalized at Samba Hospital.

On the 20th the team went on to Mbeni Hospital After which the ITM promoters returned to Belgium.

Dr Younoussa will prepare a training on the management of drug resistant TB in Comoros taking advantage of the possible visit of Dr Alberto Piubello. The advice is to prepare the training taking into account the number of people who can benefit from it.

Dr. Younoussa will send Dr. Attoumani who is based in Grand Comore to a training on the management of MDR-TB organized in Niger by Dr. Alberto Piubello.

A big thank you to the team in the Comoros for the excellent organization of the visit and the dedicated work that has been done for many years!

Please note that the data supporting the findings of this study are retained at the Institute of Tropical Medicine, Antwerp and will not be made openly accessible due to ethical and privacy concerns. Data can however me made available after approval of a motivated and written request to the Institute of Tropical Medicine at ITMresearchdataaccess@itg.be. 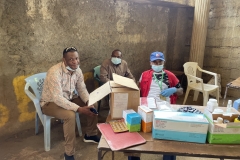 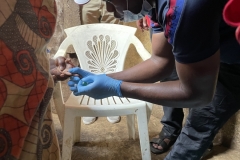 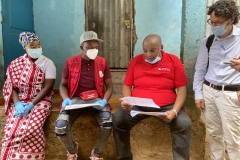 After 2 years of online meetings due to Covid, the PEOPLE consortium will get together one last time in Madagascar at the beginning of October this year to exchange data and results and see how the project can be brought to a successful end in February 2023.

Our ITM promotors of the PEOPLE project, Bouke de Jong and Epco Hasker, visited the Comoros islands for follow up of the project, which is now going into its fourth year, together with their colleague Dr. Nimer Ortuno Gutierrez from the Damien Foundation. They discussed preparation of potential follow-up projects, further building on the impactful […]